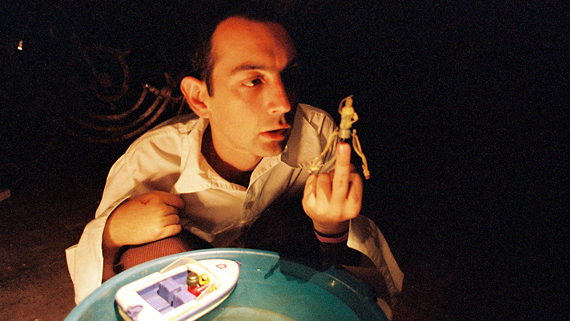 As a personal experience, Oligor Brothers was much more than directing a documentary film. We found two brothers who had long been closed in an underground of Valencia building something like a play. It did not seem easy to show his creative process. Jomi and Senén had mixed emotions of what they he had recently suffered.

At first they were locked in their own world and did not understand why someone wanted to make a film about them. The Oligor began to empathize when they realized that the crew were willing to suffer difficulties similar to those they had passed.

From 2002 to 2004 we followed Oligor’s daily life. We shot at the super small, dark space that had been devised for the work without the knowledge of the audience. Sometimes we get only one shot of an entire function. Those were hard times due to difficulties in financing and the characteristics of the shooting. It’s like they were giving us all either good or bad of what they had experienced in their own flesh.

Finally, I could explain a side story of his show without revealing the contents of this. I think it is a great movie as it transmits the essence of Oligor Brothers and touches the deepest emotions of viewers.